Wii controller encounters PC is probably the most appropriate description if you should one describe the feeling of Simraceway SRW-S1 steering wheel by SteelSeries in one sentence.

Unlike the I seen a lot and used steering wheels, which are mounted firmly on the table or clamped between the legs comes with the SteelSeries SRW-S1 a very different and unusual way the control of racing games on the PC.

The steering wheel is not much wider than a common gamepad as it comes with a PS3 for example, and must never be fixed. On the contrary, it is so that you simply designed it holds in his hand. At first one can imagine, this is difficult for a PC steering wheel by the usual technique. However, it is like Mario Cart on the Wii, only with a lot more features and a significantly better ergonomics.
The steering wheel is indeed wired, but you have the length of the cable a very good freedom of movement and not having to worry about the batteries give up the middle of the race the spirit.
The steering movements are detected by the built-in G-sensor and passed very precisely to the game. For the motion control but one still has 15 keys, three knobs and a control cross on top of the steering wheel, causing veritable Formula 1 Feeling arises.

In the accustomed of many steering wheels shift knob and pedal set has been omitted. These functions have been integrated into the steering wheel. The steering wheel has four paddles on the back. The bottom two are to accelerate and brake, the top two are for switching. The right switch point is indicated by a corresponding LED's. However, this feature does not work in all games. Some games allow this function using a Regestryänderung which are directly from SteelSeries. Other games do not support this feature. Simraceway is the only game that supports this feature without amendment the Regestry.

The SRW-S1 is very good and very good grip through the rubber coating in hand. The keys are distributed easily accessible and fit over the steering wheel. The dosage of the accelerator and brake is surprisingly good. Initially, however, it is unusual to hold the steering wheel so long in hand, without this being fixed somewhere. After one or two rounds you have however become used fast to this freedom of movement and you feel more and more as a real racer.

The game can be downloaded free Simraceway the Internet and (alone) to play local or online (multiplayer). Through the $ 10 voucher included, you can buy one or the other car still. It is built on a dedicated graphics and physics. The graphics are not the most beautiful, the driving behavior may, however, convince fully. The game, however, is not comparable to an NFS or the like.

All in all, it is the SRW-S1 to an ingenious steering wheel, which can convince with his freedom of movement, accuracy and functionality. 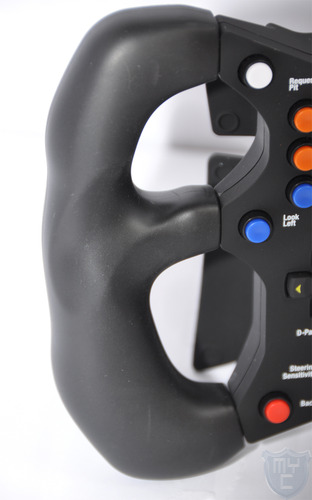 A classic racing game on the WiiNeed for Speed: Carbon (video game)

Extremely good racing game, not a need for speed!Need for Speed: Most Wanted (Video Game)